I think it actually isn't. They were shooting in Bodrum and Mugla, some villages there..at least based on some pics I saw so far

I think it actually isn't. They were shooting in Bodrum and Mugla, some villages there..at least based on some pics I saw so far

Yes sorry that‘s what I meant.

belalugosi wrote: ↑
Sat Dec 14, 2019 6:22 am
It's the way they've played the triangle. I think people were expecting more serious love between Ferhat and Sirin and then Banu deliberately comes between them, ama Ferhat has basically chosen to make it messier than it had to be because of his ulterior motives. I think people don't get what energy they're going for, there's even a lot of social media people who genuinely seem to believe he might end up with Banu.

But the soundtrack is still really good!!


Is Cansu the lead? Cause I was thinking the title could me more about Ferhat and Sirin not as a couple but as how they relate to Banu. I don;t think either couple has great chemistry, but I prefer Tolga and Cansu. It's a shame cause I think this story could have been really interesting but the writer doesn't seem to be doing much at all with it.
The soundtrack is beautiful.
Top 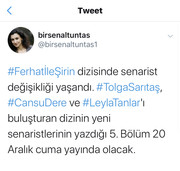 The same happened with Kursun I think and they barely aired 1 episode after that :D

Bolum 5 fragman 1. So we meet the troublemaker (Sarp Akkaya) and Ferhat meets his mom!

Ozet for bolum 5. Nothing much but the basics.
https://www.izleyiciplatformu.com/ferha ... 5-preview/

It seems the grandmothe, Isil Yucesoy, is leaving the series and episode 5 is her last episode.
Top
Post Reply Previous topicNext topic
190 posts